First of all, ToA: Seasons Of The Wolf is now officially out on Steam: http://store.steampowered.com/app/333390/
If you can spread the word in any way, I’d appreciate it! 🙂

Also if you liked the game, please leave a positive review on Steam since it helps.

And now, let’s talk about… Summer In Trigue! The nice lady below is Grace: 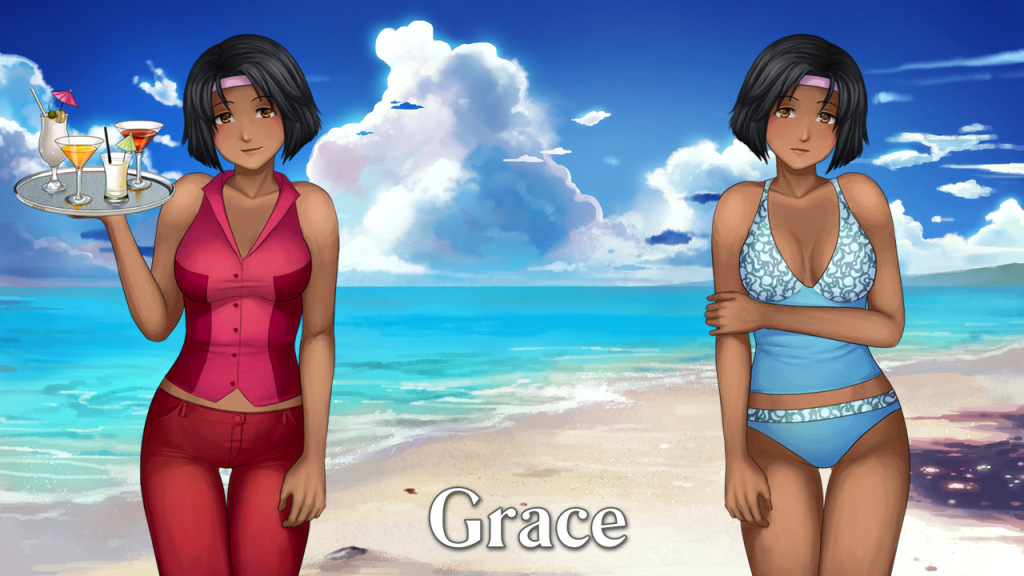 It was about time to introduce the first character of the new yuri-only dating sim I’m working since a few months (sorry, no estimate release date for now!), called indeed “Summer In Trigue” 😀 (the best dating sim name ever!)

A young woman who was born in and raised in California, Grace had a fairly sheltered life due to her somewhat overprotective parents and the fact that she was homeschooled since kindergarten. When the chance to do some seasonal work in Trigue alongside a friend came to her, she took it, partially to do something a bit daring and force herself to grow, and partially to get a reprieve from her parents’ hints about how much they’d just love some grandchildren.

She has an introverted nature and struggles somewhat with social anxiety, but despite this, balances part-time jobs as both a waitress and a bartender. She far prefers the latter job, and has found an unexpected talent for mixing drinks, a previously unrealized love of booze, and a penchant for sensing people’s moods have all helped her excel at it. Her high level of patience has helped her with both jobs.

Grace is a huge fan of fiction and loves anything that can tell a good story, but she is especially found of novels, anime, and video games. Though she lives on a beautiful tropical island, her idea of a great evening is usually unwinding in her apartment after a stressful day at work with a drink and a good book. Or relaxing on the beach… with a drink and a good book.

Grace’s friend and roommate who was forced to return to the US a few weeks ago, which has left Grace very much alone. This doesn’t bother Grace most of the time, though occasionally she does feel very lonely. Still, her life is far more exciting than back home, and ironically enough also far more peaceful without her parents and friends trying to set her up with a boyfriend, so she doesn’t have too many complaints.

That’s all for this week. More character introduction (both of this game and the other ones in progress) coming soon 🙂

6 Responses to Summer In Trigue – Grace