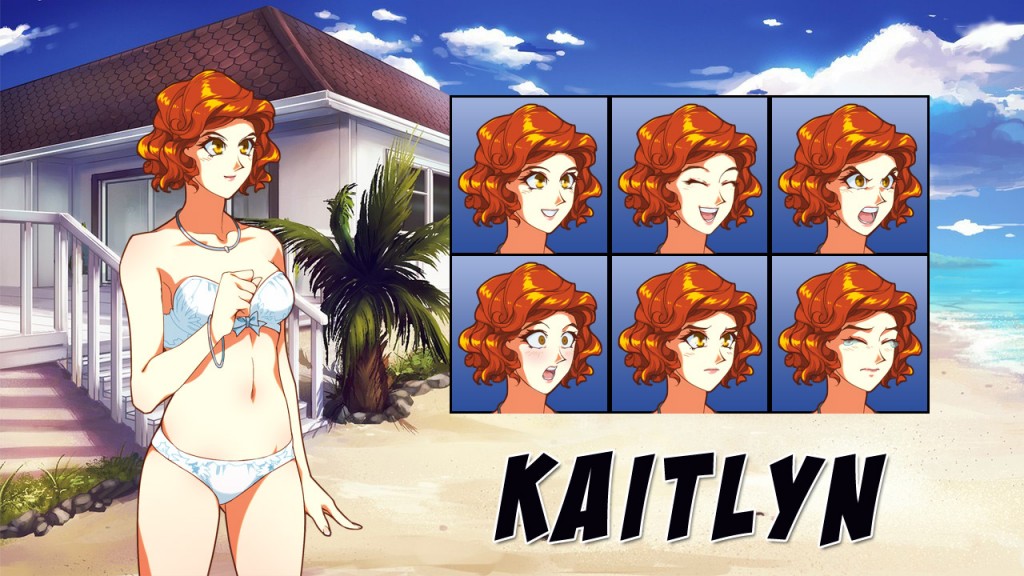 Here’s the first introduction, Kaitlyn. Why is she in underwear? Well in the announcement post I already showed the two other outfits, so I thought to do an innovative thing: “intro underwear”! Now the cool guys introduce their story characters in underwear, to show they’ve nothing to hide ;D

All right, now let’s see what the writer has to say about Kaitlyn, the female protagonist of this game:

Kaitlyn, the younger fraternal twin of Brandon, just graduated with a degree in chemical engineering.  She was fortunate to procure an entry level position at a pharmaceuticals company, but her new job won’t start for a few months.  As such, Kaitlyn’s trying to earn what she can while staying at home, so she could have her own place.

It isn’t that her parents minded her presence, but Kaitlyn wants to spread her wings, and show that she can make it on her own.  Ultimately, she wants to be her own boss, but that dream is much further down the line.

Now that she’s out of school, Kaitlyn would also like to relax a little.  Especially during her last year of school, she had to give up much of her free time in order do as well as she did.

Kaitlyn is now wondering whether all this studying was good for her, though.  Lately, she could swear she is seeing things, things which might be tricks of an exhausted mind.  For example, as she was getting a cappuccino, Kaitlyn thought she saw a ghostly figure in the mirror behind the barista, but a quick rub of her eyes showed nothing there.

Kaitlyn doesn’t know whether there is something more going on, or she is just more observant of the unusual lately.  Whatever the answer, there are more important matters she must devote her time to…

Good news, C14 Dating beta should be ready by end of this month, and the final release not much far away (of course depends on how many problems people will find during the beta testing!).

Meanwhile Heirs & Graces and Never Forget Me (Always Remember Me sequel) are already being scripted. The former has all the story and art done (but still missing the music), while the latter is missing a few scenes and some artwork. For both I still need to design the scheduler/stat raising part though.

The Queen Of Thieves got all the yuri scenes scripted but I need to review them all, and it’s still missing a few art and scenes as well. My idea is to release Heirs & Graces and Never Forget Me first, and then work on finishing this game since doing a beta testing of a RPG is always a complex/stressful thing to do, and I need to be 100% focused on this task only.