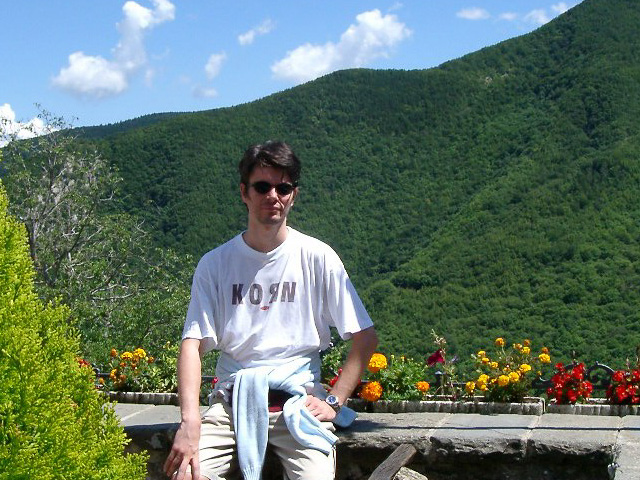 I don’t have any decent recent photo so I’ll just go with this one, a few years ago 🙂

Today I’m 40, and it has been more or less 10 years since I’m doing indie games!

All began back in 2003, when I discovered the now defunct Dexterity forums. I was working as webdesigner, after the small italian software house where I was working before went bankrupt (they were making story-based games too, but more like point’n’click adventures).

To be honest I had sort of given up working on games, since at the moment the situation was impossible. Italian software houses were all very far away from me and I wasn’t ready to leave everything and move away from home, besides the situation wasn’t really good (in the next few years indeed more companies shut down).

But I thought I could still do them in my spare time, as hobby. Then I discovered about the online distribution, and being indie, and it was like a whole new world opening in front of my eyes! So I started using Blitz3d to make a soccer management game. First advice to new indies: don’t try to do a project too big as your first attempt!

In the end I managed to finish it, but was quite bugged and in general, did poor. After that, I made some smaller games to learn C/C++. A match-3 game called Spin Around, a platform/maze game called Ignazio The Frog 😀 I still laugh thinking at those games, but they helped me to learn coding and most importantly selling games online.

The “big step” was when later that year I made Universal Boxing Manager and The Goalkeeper. Both sports sims, rather simple, with art made by myself. But at those times the market was MUCH LESS competitive than is nowadays. Those two games gave me hope, even if I was still living with parents 🙂

I made some more games in C like Magic Stones or Supernova 2: Spacewar, before finally moving to python and open source dev. I posted about this already not too long ago.

In the “recent history”, the past 3-4 years, it was an up and down. I had some decent successes like Spirited Heart, followed by games acclaimed by “critics” like Bionic Heart but that sold poorly (same thing happened to the sequel).

I remember back in September 2010, when I had just released the two lowest-selling games I’ve ever made, both Vera Blanc titles, and the situation was rather critical. I didn’t expect it because the previous year was good, and I didn’t think that revenues could go down so quickly! I had only a few months of savings left before I had to quit and go back in a office work!

That was when I took two important decisions: make also more complex games like RPGs and outsource more people.

The first resulted in Planet Stronghold being frantically coded by myself in 4-5 months, including game design, writing and everything. The second decision lead to releasing games made with the help of other people, in particular in the writing department, but recently also coding.

One of them, Always Remember Me later today will debut on Steam, and I have two more coming shortly next month, for a total of four games. I arrived on Steam a bit late compared to other indies, but hey, at least I’m there now 😀

I’ve written already post-mortems of my more recent games like Loren, Heileen 3,  Rommates so I won’t repeat myself here.

Even if things are going well now, I’m definitely not sitting on my laurels. What happened back in 2010 could still happen. Two or three consecutive flops, and things might look grim again. Of course I am more relaxed now, but I must still work a lot of hours every day. Luckily for me, I love this job 🙂

Is really hard to say what will happen in the next 10 years! Don’t know if the main gaming platform will be SteamOS or still Windows, or some console/mobile platform. But I honestly hope to be still around, and still make the kind of games I make now.

I love hand-drawn art, and while I can see the benefits of 3D for certain type of games (I always wanted to do a sequel of my boxing game with 3d for example) honestly I think doing a full 3d game is out of my reach, and probably couldn’t even be a good idea for a good return of investment  since doing 3d games is more expensive/time consuming.

While I have some ideas for other kind of games, like a tower defense game and a dungeon crawler, I think that most of my next games will be similar to the one I made recently: story-based RPG or dating/life sims, with a variety of romances for all tastes.

One thing I want to do differently is: make some gay/lesbian exclusive games. Won’t be soon since I have a big backlog of games to finish first, but once I’m done with them, I plan to do it 🙂

Thanks for reading, and for supporting me during all those years. Even if I went through some rather rough times, I never felt I was actually working for a single day since I went indie, and that is really something ! 🙂