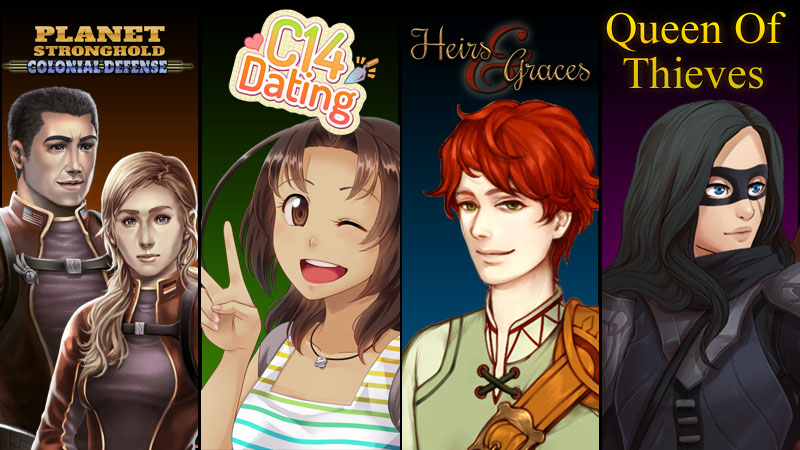 This year, so far I finished three games, with the fourth (Queen Of Thieves) already in a good state for a beta. So, what’s next? 🙂

First of all, we’re halfway through 2016. I’m not going to lie, things have changed A LOT for the indie business. For the first time I heard other indies quitting or taking contract work to pay the bills. It’s scary. I am fine, since I live very frugally (my biggest expense is cat food! haha) but still, I cannot deny that I’m a bit worried too!

Early this year I released PSCD, which underperformed despite great writing and good gameplay design (not my biased opinion, it has 100% positive ratings on Steam!). I didn’t know why at first, but soon I understood the main reason: the art. The next games, C14 Dating and Heirs & Graces, did as expected, or even better than I thought.  Queen Of Thieves is in beta and in preorder since a week so it’s a bit early, but so far the impression is very positive.

In summary, all is good! I only hope the artist finishes the main plot CGs soon… I might need to use my motivational whip to speed things up! 😉

Going back to the original question: a few weeks ago I talked about burnout, and the risk of ignoring it. So I’m well aware of it, and indeed I’m taking frequent breaks from work. In practice instead of long holidays, I work every day (even weekends!), but less hours than I used to. Thanks to that, I am not really burned out or tired right now, and I’m planning what to do in the next months.

As already posted in the past, I am thinking to do some “other games“: games in which the gameplay is more important, without a plot or with a smaller plot. This because honestly, writing a good story of 120k+ words (like all my recent games, in some cases even double that amount!) is going to take time. And I don’t want to rush writers, because if the story of a story-based game is bad… yeah, you get it! So, an alternative is to work on something else on the side, while I wait for them to finish.

I made a small poll in my forums asking what kind of gameplay people would like to see mixed with visual novel/story: http://www.winterwolves.net/viewtopic.php?f=19&t=3885

At the moment of writing this, “simulation” seems to be the most popular. Which is good, since it’s one of my favorite game genres and one I think I’m skilled enough (my early games were all simulations). This means that maybe I’ll try to add a more complex/detailed simulation part in my upcoming game Amber’s Magic Shop!

This is what I’m planning to do in the remaining months this year: some gameplay experiment/prototypes. I might post them in public and ask for feedback and then decide if they’re ideas worth pursuing or not.

Of course, the “regular games” will have the precedence. I’ll do those experiments while I wait for my collaborators to send me updates and make progresses 🙂