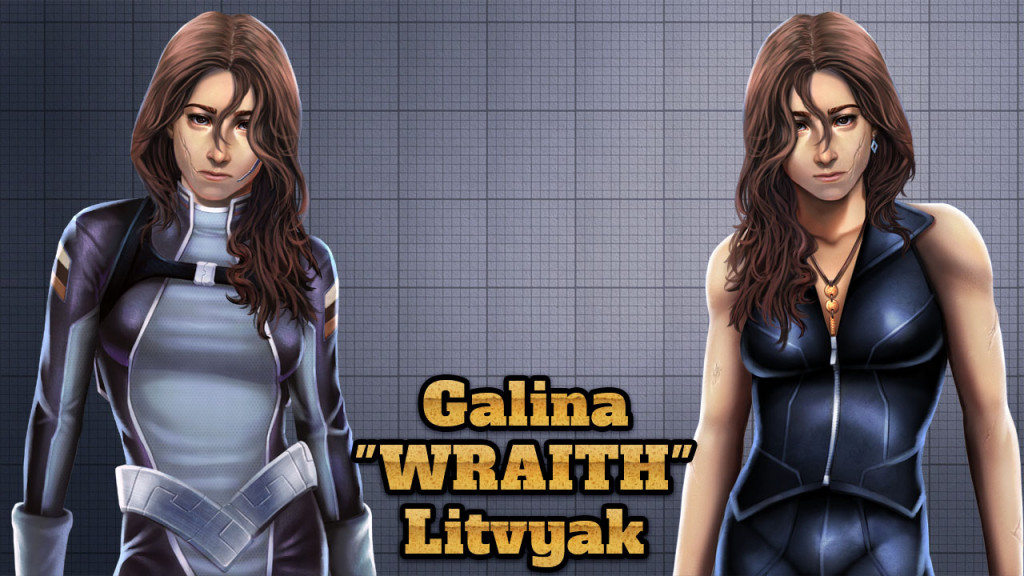 Apparently last week’s character, Cristoph (which will be changed into Cristophe thanks to the suggestion of some French friends) has shocked some user because of his abundance of hair in the abdomen part of his body… 😀

So this time here’s a nice and kind lady, Galina. Well, maybe not very kind. Read her introduction:

Description:
Considered the most taciturn member of the squad, Galina wasn’t always so reserved.  In her civilian life, she was a successful bounty hunter.  While she started nabbing small-time crooks and thugs, Galina’s expertise had her catching bigger and bigger game.  So successful was she, she managed to bring in the head of a criminal syndicate, rupturing  his organization in the process.

Unfortunately, this success marked her for death, and in a move to save her life, she joined the military.  Not one to squander talent when they see it, her superiors use Galina’s to extract or eliminate personnel when other conventional means have failed.

One incident stands out in Galina’s otherwise brilliant career.  While the particulars of the mission are considered top-secret, a whole noble house was brought low as a result, and Galina proudly wears the scar she earned in the course of her mission.  Though Imperial medicine is more than capable of healing this wound, Galina refused, since her marking, unlike the mission details, can’t be swept under the rug.

Galina earned the sobriquet of Wraith for her ability to go anywhere, no matter how heavily guarded and achieve her aims.  Adding a macabre twist, if her target must die, she will lay two old-time coins on the eyes of her victims, giving Death her due.

It would be wrong to say Galina never smiles, but her tastes runs to gallows’ humor and this is quiet acceptance of the end discomfits most of her teammates.

So…I’m again in a funny situation where several games are in the making, but each one has an aspect delaying it. One game is advanced for story/art, but behind with coding. Another is behind with art. Another with writing. And so on 🙂

For sure the essential part of (most) of my games is the writing, since without it there isn’t a story, and the game itself. What I’m going to do from now is: with the few very reliable writers, I’ll keep producing stories, so that only art/coding is missing. This way should speed up future games. One thing is to send an artist a clear list of what to do, and a deadline. Different is to commission first some things, then some other, and some other again. Also, seems that writing is the activity that takes more time for each game, so having already some plot ready it’s surely not a bad idea!

Anyways, I also realized that of the upcoming games, except for C14 Dating and Queen Of Thieves, all the others are yuri/yaoi only. It’s not bad of course, but I’ve been considering doing a sequel to my old (but still quite famous) otome game Always Remember Me 🙂 It will be different from the others since will focus on the couple life, and the final goal will be to stay together and not break up with your current partner (in the beginning you’ll be able to select your partner from the four original boys of Always Remember Me). Done this way it won’t be required to having played the previous title at all.

And the best thing is that it would be something I could do on my own (the storyboard of course, writing would be done by a pro writer) so not delaying the other projects 🙂

I’m also working hard on SOTW DLC but now I am missing some art, even if I’ve already commissioned it. If all goes well should have it done by mid-April. By popular request, I’m also going to try adding a “visual novel” mode to SOTW, so that you can skip completely the battles or a least most of them 🙂