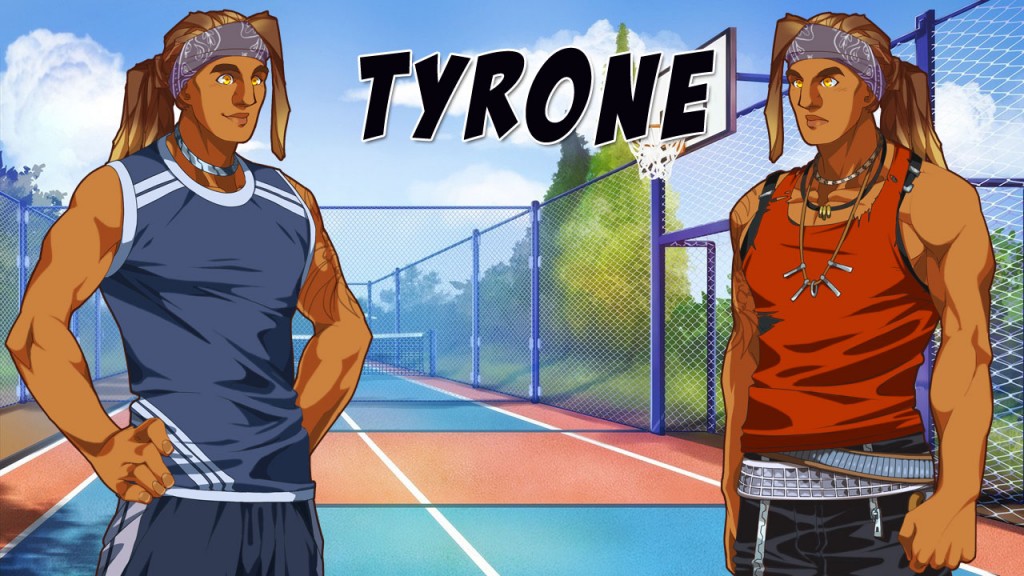 Time to introduce the second male love interest of Love Bites, Tyrone! I like his unique design, which makes him different from the other males of this game.

Now, let’s see what the writer has to say about him…

Almost everyone on campus knows Tyrone for he is considered one of the best athletes the basketball team has ever had. What might be more surprising, however, is that Tyrone is also one of the top students trying to earn a business degree. Unlike many other athletes, Tyrone wants to take full advantage of his athletic scholarship since the odds are against any student making it into professional sports.

Despite his athletic prowess, Tyrone is a bit aloof, keeping himself at arm’s length from a serious relationship…which makes him that much more desirable to people who want to break through his tough outer shell.

This isn’t to say Tyrone is shy, but there is a reason he keeps himself apart…and that’s because he’s found himself in a bit of a predicament, one he doesn’t feel he can share with anyone else. Since entering college, every night of the full moon, a change overcomes him.

At first, Tyrone thought he was suffering strange dreams, one where he wasn’t human, but something else…he would have chalked this up to something he ate, but he almost always woke in the nude, clothes nowhere to be seen.

Figuring this was simply fatigue, Tyrone went about his day until he overheard fellow students talking about a phantom cat which started to frequent the campus…a feline which started to appear at the time of his dreams.

So, on the night of the next full moon, Tyrone set up a camera to record his actions during the night, though he felt a little foolish doing so. The next morning, he suffered the same dreams…and lack of clothing…as ever. When he played the camera, he was shocked to see that there was more to his dreams…that he changed into a lion.

Tyrone didn’t know what to do with this knowledge, and he went through the next few days in a daze. This might have continued when an older student tapped him on the shoulder, and asked him out to coffee.

Tyrone replied that while he was flattered by the attention, he wasn’t interested in a date…to which the woman chuckled. Introducing herself as Ashley, the woman said she wasn’t looking to get into a relationship, but just that if Tyrone didn’t stop his feline antics, he could get them all in trouble.

Tyrone realized this woman seemed to know what he was, and agreed to coffee…whereupon he saw he wasn’t the only person to go through such things. However, this knowledge isn’t all good since it also means there are malevolent forces in the shadows…shadows which aren’t afraid to strike back.

This week I’ve also officially released C14 Dating! Below you can see the beautiful game trailer:

You can try the demo and purchase the game here: http://winterwolves.com/c14dating.htm

For those stuck or needing help, there’s a nice tip/walkthrough thread in my forums: http://www.winterwolves.net/viewtopic.php?f=41&t=3824

As always you’ll be able to redeem Steam codes for the game once it’s live there (probably end of April or May).