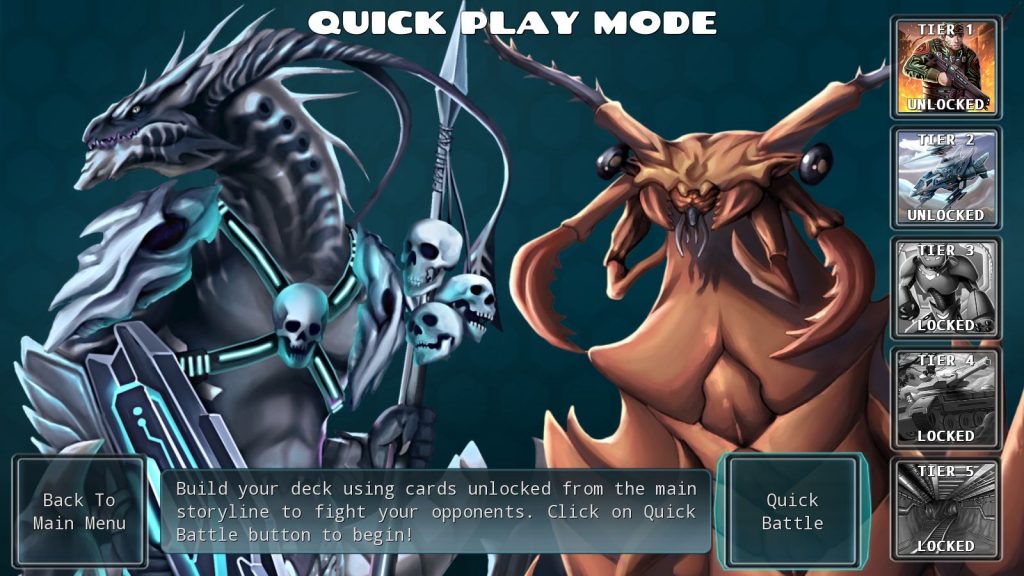 In the image above you see a screenshot from the PSCD Free DLC currently in beta!

You need to download the beta version here to try it (on the site there’s still the older version): http://www.winterwolves.net/viewtopic.php?f=42&t=3856

You might need to re-register the game again to see the extra contents.

Beside the four extra romances: Galina, Kaden, Christophe, Lola, I have decided to do a “quick match” mode. In that mode you can play all the cards you have unlocked in the game (tier-based) and do a match with predefined enemy decks.

Using this “tiered unlock” it’s good, since will let me include the mode also in the demo, because players can try it (for example for practice), but without the high tier cards (which you can only get later in the game) will be hard (if not impossible) to win. So it’s a sort of “trial” that might make more people curious / interested about the full game.

If you beat the game once, you’ll also unlock the 5th tier, which is normally unaccessible from the base game, and it includes the most rare cards (legendary ones). Since I had already added them in the code, was a pity to “waste them”, so at least they can be used in the non-campaign mode.

This means that if you won the game already it’s enough to load a save before the end, to get access to all the cards in the quick match mode.

The beta testing continues, and luckily everything seems to be going smoothly, even if it was to be expected for a dating sim. I suspect Queen Of Thieves testing will be more troublesome 😉

Anyway I’m pleased so far by the game reception and how people liked the idea/writing/art/music.

I must say though that in future (except for the game already in the works) it’s a bit unlikely I’ll do again a game with only one playable gender or romance type. Making a game takes already so much effort that I think it’s best to at least try to cater to two audiences.

So for example in this game I could have added a female character to have yaoi+otome, or add 4 female romances to have yaoi+straight, and so on (probably I’d have reduced the amount of romanceable characters, or made some bisex).

Anyway, this game is done as it is: but for future games I’ll always try to have at least two genders or “romance combos” 🙂

As you know from time to time I make some “romance sneak peeks” for my upcoming games, even months before they’re out, because I like to tease people! 😀 Here’s the Undead Lily’s Lily romances (so playing as Lily and romancing both male/female characters):

Some characters have two different ending CG, based on the concept of “dominant/submissive”. I can assure you that they’re very interesting!