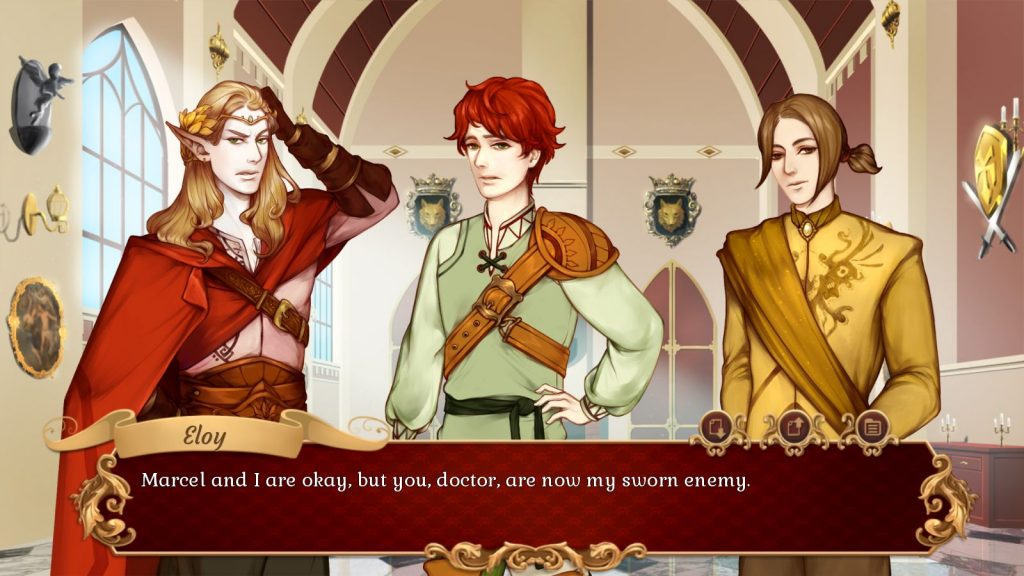 In the screenshot above, one of the various jealousy scenes

Well, last week I’ve told you that this would be the next game to come out, though I admit I didn’t expect to finish it so soon! 🙂 Obviously I’m talking about the beta version, however I think the official release should happen before the end of month.

Anyway, you can head to this page to try the game beta demo and pre-purchase it:
http://winterwolves.com/heirsandgraces.htm

There’s a beta demo download in forums in this thread: http://winterwolves.net/viewtopic.php?f=44&t=3851

Like always, since it’s a beta version it might still contain bugs. However any help testing it will be greatly appreciated!

I really hope that even non-yaoi fans will try the game, since I believe it has a very nice art, GUI, music and writing. I’m also interested to know what people think of the scheduler/stat raising system. It’s a bit similar to Roommates, but it has also some “skill checks” to do, so you need to plan and think more what to do next.

Playing in Easy mode, you won’t have any problems though 😉

While doing a beta, I usually try to go on with other games. Unless the beta is for a RPG, in that case I’m usually busy fixing bugs/adding features, so I have no time for anything else!

Anyway, while Heirs & Graces beta goes on, alongside it will finally decide what to do with PSCD and the extra romances. I’ll start first by adding all of them to the base game, and then if there’s enough time (and I’m not burned out too much!) I’ll also see if I can add some sort of “free play mode” or something like that. This way I could even add the extra cards who were planned for the DLC.

Once the PSCD DLC is finished, I’ll finally resume working on Queen Of Thieves. First I’ll take a small break though 🙂