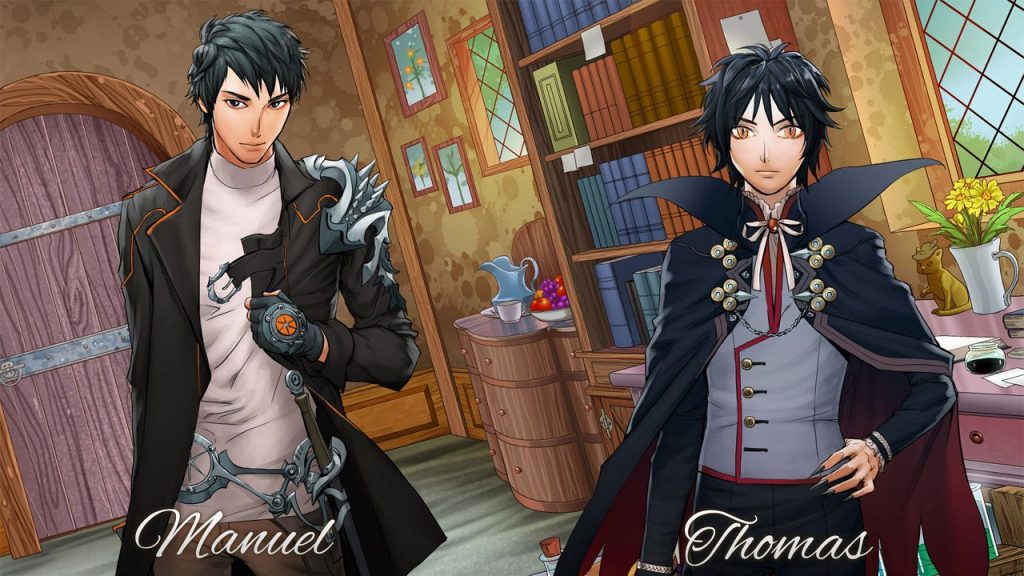 Since all the main characters were introduced, now it’s time to look at some secondary ones. They will still play an important role in the story. And they have their own pin-up CG too! 😉

Thomas is Ruby’s brother and a vampire just like her. When Ruby was first turned, she could not bear to be parted from him so she turned him against his will. He resented her at first for it but eventually came to accept it.

He always got on well with his sister and spending eternity with her did not sound too bad after he thought about. Unlike her, however, he does not completely reject his vampiric nature, although he tries his best not to feed on men and women so as not to upset his sister.

Few people in Icesilia have not heard of Manuel, mostly because he spends most of his time telling everyone about himself. He is an adventurer and prominent in the Adventurer’s Guild despite his apparent inability to complete tough missions without help from his friend, Bernard.

What he might lack in strength, however, is more than made up with his quickness of wit, his limitless charm and political acumen. That is not to say he is physically weak by any means, he is more than a match for most skilled warriors, but he is no legendary warrior and he will admit that if pressed.

Work on the game itself continues, but there’s still quite some work to do (in particular regarding the gameplay part, since the shop builder it’s not a small addition!). Anyways, still aiming at a beta release before Q1 ends (so before end of March). 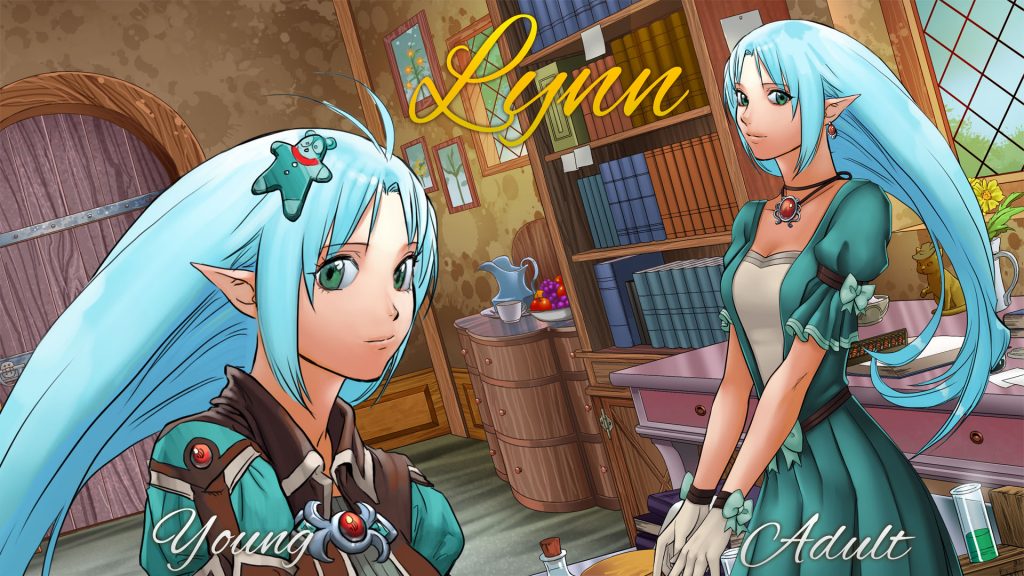 Time to resume with Amber’s characters introductions. Now it’s the turn of Lynn: a serious contender for “most cute character in a game”! 🙂

One of the many Elves that makes up a sizeable proportion of the population of Icesilia, Lynn spent most of her life away from Grandtree and her extended family.

Her mother took her north east during the Third Demon War and settled alongside many refugees from that conflict. She grew up in the premier herbalist establishment in Icesilia and that has afforded her a fairly comfortable life. Her mother is an ambitious woman who believes that every generation should be more successful than the last.

To aid her daughter in accomplishing this, she has raised her to be what would be regarded as the perfect bride for the noble Elves in the city. Lynn, on the other hand, just wants to follow in her mother’s footsteps and be an herbalist like them.

As an adult, Lynn is torn between running the shop now that her mother has retired and the arranged marriage she has with an older noble in the city. She is not necessarily against the marriage but she wants to be sure the person she marries loves her as much as she loves them.

Lynn is a kind person who tries her best not to judge others. She quickly becomes Amber’s best friend and frequently confides in her. Despite having no memories of Grandtree, she is very interested in her roots and dives into Elvish tradition when she has the chance between all of her other responsibilities.

Despite this interest, she does not hold to the traditional discrimination against Dark Elves and frequently defends Amber’s right to live in the city against those who seek to drive her away.

This is the last character intro, regarding the love interests. But I still have a couple more introductions for secondary characters! They will appear on the next blog posts!

Queen Of Thieves on Steam

At last, even Queen Of Thieves is available on Steam. You can get it at this page:
http://store.steampowered.com/app/524200

as usual those who purchased directly can redeem a free Steam key here:
http://www.bestanimegames.com/steam/

If you liked the game, remember to leave a review on the store page since they might help others to enjoy the game as well 🙂 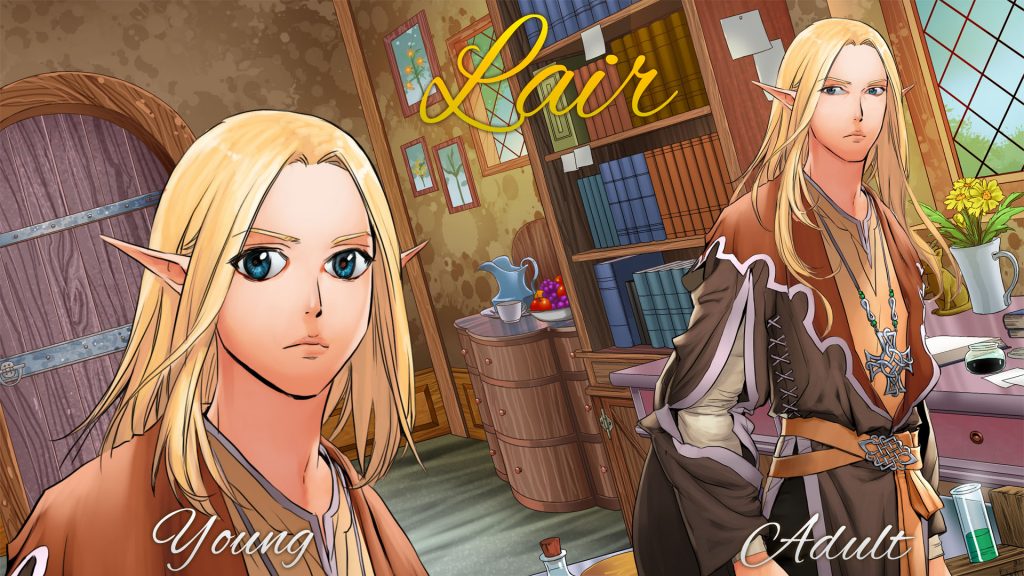 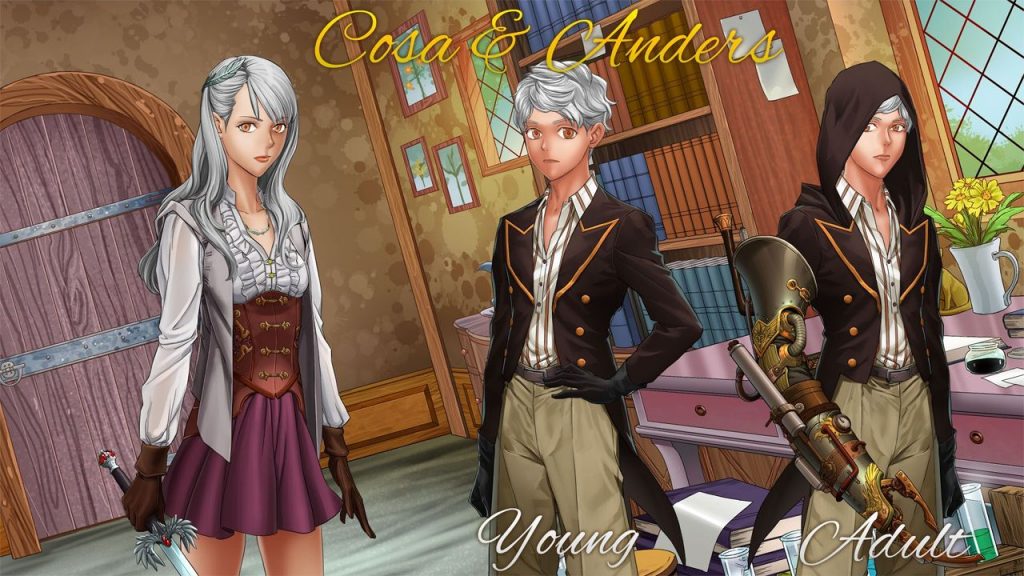 First of all a short announcement: all my games are discounted for the Steam Thanksgiving sale. Also, Happy Thanksgiving! 🙂

Back on topic: why those two characters are introduced together, you might wonder? Well…let’s say that they are often seen together during the story. This is also a particular path since you get an extra bonus CG in it. But wait, I’m saying too much! Let’s proceed with the introduction.

Mysterious adventurers that always seem to be on the run from the Royal Guard, Amber finds herself thrown into the dangerous exploits of the two silver-haired humans.

The pair have a deep interest in alchemy and frequently request assistance from Amber to aid in their own research. Cosa, in particular, has a mission of her own that involves alchemy and she wants to recruit Amber to her cause.

In later years, Amber continues to work with Cosa and Anders to create the legendary Panacea to cure Cosa’s father who is dying from an incurable disease. Their adventures take them all over the country surrounding Icesilia and soon Amber finds out just what Cosa and Anders did to upset the King and Queen of Icesilia.

Cosa is a driven individual who has trained all her life to be an adventurer and warrior. She strives to be perfect in everything she does and has little time for anything but the best. Anders, on the other hand, tends to be fairly laidback although he gets enthusiastic when he has the opportunity to experience new things or try out new technology.

The two of them are close and Amber suspects they are lovers. Still, they tend to be awfully affectionate with her too…

What do you think? an interesting premise 😉 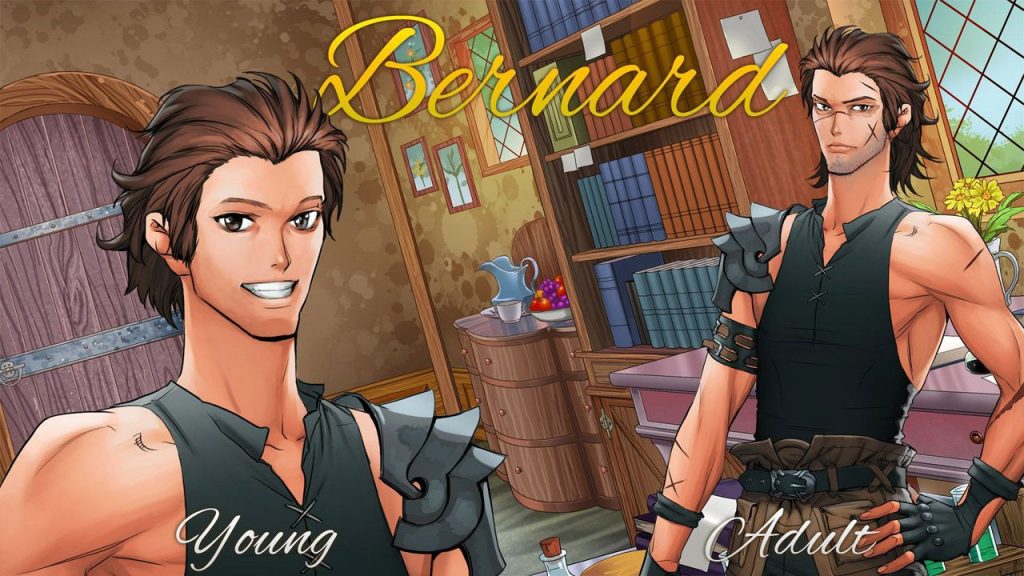 Bernard has one of the most interesting story arcs in my opinion. I also like his design, hot muscular guy, but looking different than the others, more slender but still sexy. The classic cursed / hot tempered guy 🙂

Bernard tends not to talk much about himself and he rarely opens up to people he does not know well. What people do know about him is he is a rising star in the Adventurer’s Guild and he has little time for anything but his ambitions.

He wants to rise because he believes the guild system is unfair but he also enjoys the praise and wealth that comes with promotion.

As an adult, Bernard continues his rise although grows frustrated as his previous meteoric pace slows to a crawl. He suspects his superiors are plotting against him and reaches out to Amber to help him rise to the position of Guild Leader. Amber agrees although she quickly finds that years of constant struggle have started to take their toll on Bernard’s psyche. She only hopes that she can help him before paranoia and ambition consume him completely.

Passion is Bernard’s greatest strength and weakness. He always tries his hardest and he never lets setbacks get in the way. Unfortunately, his drive blinds him to potential problems and he frequently gets himself into dangerous situations due to his refusal to believe he could be wrong.

So far, he has survived every situation he has got himself into, but it just fuels his invincibility complex further. Someday his luck might run out, but for now he will continue to push himself until he breaks himself or someone else.

In other news, the beta for Never Forget Me continues, and I’m only waiting for the missing trailers before doing the official release. I think will be around half-November 🙂