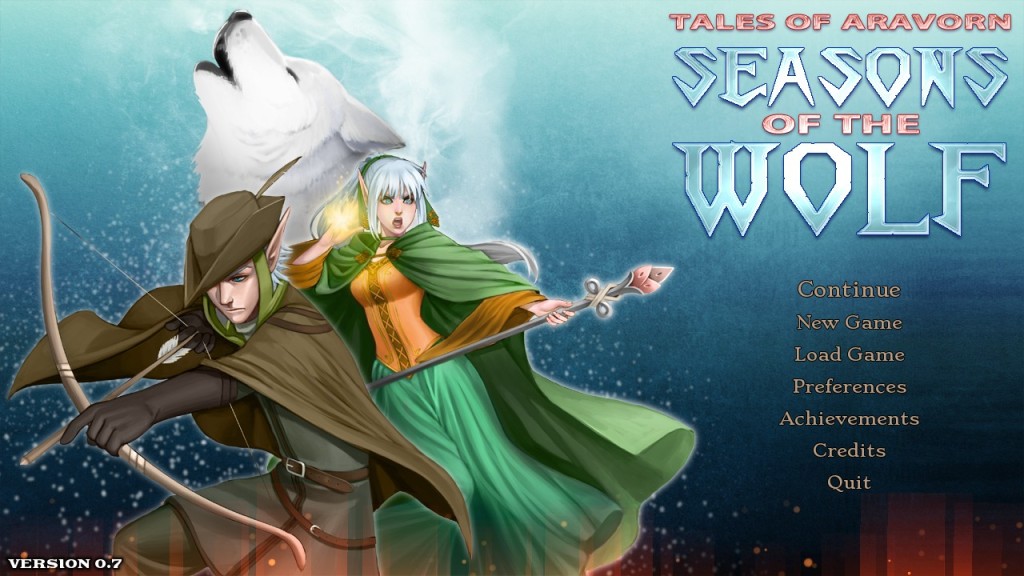 The game main menu, really happy about the look!

Seasons Of The Wolf: Winter Is Coming!

Haha forgive the pun 🙂 But yes, the first act/season of the story is now available for beta-testing ! I am quite enthusiast of the result, and hopefully you’ll like it too. In this first season, for plot reasons you can play only 3 characters, but don’t worry, as story goes on you’ll recruit the others.

As you can see from the main menu image, the official title is Tales Of Aravorn: Seasons Of The Wolf. Why? Because I want to enter the Guinness World Records for the longest game title, that’s why!! 😀

Talking seriously, the “Tales Of Aravorn” will basically be a series of games all set in the same fantasy game world, featuring references, cameos, etc of characters and places from other games.

Beside this one, there is already in the works the two Loren games (Reign Of War, Reign of Peace), and Amber’s Magic Shop. Plus Queen Of Thieves, which I haven’t forgotten, even if I put it on hiatus (I can’t work on so many games at once anymore, I’m getting old!).

The game version already reached 0.75 (at the moment of writing this post) and had a lot of initial bugs fixed. If you want to read more and download the beta, check my forums here:

I haven’t opened officially the preorders since I think is a bit too early – I don’t know yet when the final game will be released, probably in the next 3-4months but with RPGs you never know.

Today my other RPG Planet Stronghold was also supposed to go live on Steam, but there’s a big sale going on at the moment, and besides I’m also broken after fixing all SOTW bugs, so I decided to postpone the release to next week! Sorry about that, but will be just a few more days 🙂

This entry was posted in beta demo, indie life, planet stronghold, roleplay games, Seasons Of The Wolf. Bookmark the permalink.

4 Responses to A roleplaying weekend !