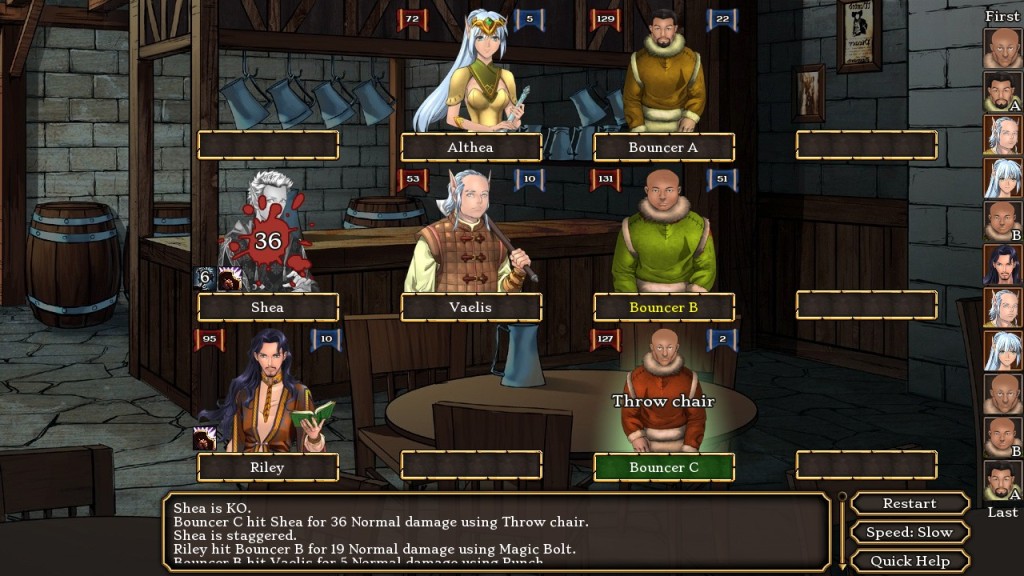 a classic tavern brawl in Dingirra (act 2). The “throw chair” is a powerful attack!

From the title you could imagine that this is a blog post announcing some delays on my next games. No, definitely isn’t! but erm, yeah there could be delays in the next games 😀

Don’t worry nothing big, only talking about a few extra months but I think is inevitable, as my games become bigger and more polished, I need to put more time into them. If I compare them with the ones I was making only 2-3 years ago, they all have custom tracks, custom backgrounds, higher art quality and more polishing in general. Also if you check other indies, they usually make 1 game a year, or max 2. So far I was still able to release at least 2-3 a year, and I believe of good quality.

RPGs in particular take a very long time, and wouldn’t be really fair to tell people that I can make more than one a year. Who knows, it MIGHT happen, since in practice I always work on the games a bit randomly depending how the various partners/collaborators do (if some works faster, I usually work on those games more). But that would be an exception 🙂

I have good news nonetheless regarding upcoming games:

About SOTW: I made good progresses on the main plot, made a lot of battles in act 2 up to the point where you have a full party (with Riley and Krimm joining you). Battles with full parties are VERY different from the first act, that’s why balancing was hard: I was focusing on the wrong way, I needed to balance act 2 and then if necessary fix some act 1 battles. Since the game must be balanced with a full party, not with 3 party members (for those who didn’t play it yet, in the first act you can control only 3 characters).

Vaelis and Rowinda background/personal quests are being added. The other romanceable characters already had them, but those two were missing. So Taleweaver (the game writer) is working on those. This won’t delay the game release since they can be unlocked in act 3, and independently from the main story.

About C14, because of my collaborators real-life tasks (relocating, weddings, etc) work will resume in July, but is at very good point and beta might be out that same month 🙂

Nicole yuri and Planet Stronghold 2 writing is going on very slowly, but making progresses at least.

Lastly, I have some news about Roger Steel. I will talk about it next month, when finally I hope to have also some artwork to show 🙂